Alfred Pennyworth is a former MI6 agent and butler working for Bruce Wayne in Beware The Batman. Batman ALLIES

In this series Alfred is portrayed as a former agent of MI-6, along with being Bruce Wayne's butler and bodyguard. He is also the godfather of Katana. Unlike earlier portrayals, Alfred has a muscular physique and is a proficient hand-to-hand combatant. In the series premiere, "Hunted" Alfred, being incapacitated and knowing he won't be around forever, hires Tatsu Yamashiro (Katana) to be Bruce's new valet and bodyguard.

Alfred is protective of Bruce and Tatsu as a sort of surrogate "Father" figure to them having pretty much looked after them both. He is portrayed in this series much differently than in previous incarnations, being much more muscular and a capable hand-to-hand combatant. He maintains his British spy background but has none of his previous incarnations elegance and etiquette. Unlike his employer, Alfred has no qualms about using firearms and is a highly proficient marksman. 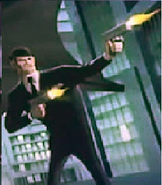