Anarky is a mysterious supervillain and primary antagonist of Beware The Batman. He debuted in the episode Tests.

Nothing is known about Anarky's true identity or past. He acts as a dark mirror image of Batman and looks upon him as his perfect foil and opponent in the game he is playing. Anarky, true to his name, believes it is his duty to bring about absolute freedom to the world via complete anarchy and chaos. He views order as boring and predictable and will do everything to stop it - even if it means bringing death and destruction throughout Gotham City.

In Tests, Anarky begins supplying vandals Junkyard Dog and Daedalus with tools to carry out acts of destruction. This is proven to be a pretext to get Batman's attention, however, when Anarky reveals his real scheme: He has attached bombs to two gondolas on the Gotham Sky Tram and tells Batman he only has time to save one. Despite his cunning, his willingness to fight dirty, and his disregard for human life, Batman foils Anarky's plans and saves everyone aboard the gondolas.

In Sacrifice, Anarky begins pitting the League of Assassins and Batman against each other by stealing Ra's al Ghul's body and asking Lady Shiva to infiltrate Gotham's Contagion Research Center and steal a virus in return for the body. His ultimate goal of causing an epidemic in Gotham by releasing a highly contagious virus is thwarted when Batman and Katana manage to contain the virus and prevent an outbreak. In the end, despite Lady Shiva's failing to obtain the virus, Anarky gives her the body anyways, leaving a note stating

In Nexus, Anarky sends a bomb inside a parcel to Mayor Grange's office and attempts to frame Batman for the crime. When Batman, in an attempt to lure Anarky out, abducts District Attorney Harvey Dent, Anarky confronts them in a warehouse. During the ensuing fight, he places proximity charges (which are set to blow if any linked pair get too far apart) on each of their wrists. Anarky orders Batman and Dent go to Symbion Park, where they will surrender to the police, lest he detonates another bomb, which he has set up in that same park. Katana, who is linked with Anarky, escapes to Symbion Park on her motorcycle. When Anarky arrives, he realizes Batman has cracked the code to the proximity charges and knows that the bombs are in the park. Anarky escapes underground after detonating the bombs. He also makes a short appearance in Monsters where he apologizes to Dent for almost killing him, but tells him that the two should become partners in order to take down Batman.

In Hero, Harvey Dent has accepted Anarky's offer of partnership and is persuaded by him to hire a mercenary named Deathstroke after a botched attempt to catch Batman and Katana. Dent, now running for mayor after Grange's resignation, uses Deathstroke to bolster the reputation of his Special Crimes Unit. Deathstroke, however, is a loose cannon, and after a disastrous fight at Gotham Pier, turns on Anarky and kidnaps Dent. Afterward, Batman saves Dent and watches Deathstroke sacrifice himself.

In Twist, Anarky meets Dent in a hospital room where he is recovering from severe burns as the result of an explosion at the S.C.U. armory. Blaming his situation on Batman, as the result of a disguise by Slade Wilson (Deathstroke), he decides to kill him. Dent, wanting to tie-up loose ends, forces Jocelyn Kilroy to end her mayoral campaign via death threat and tells Deputy Mayor David Hull to establish martial law as he goes after Batman, all while Anarky tags along. Harvey attempts to catch Batman and is warned by Anarky that it's a trap, but is knocked out by Deathstroke on top of a building. In Alone, Anarky catches up to Dent and says that Batman, after assumedly dying in a helicopter crash, is no longer a threat to their goal of taking control of the city. Dent agrees but immediately turns on Anarky, saying that he is no longer needed and has become a liability. Anarky is chased into a corner but manages to pin Dent over a windowsill. Before he can stab dent, he disarmed by Commissioner Gordon and forced to flee.

Alone in a faraway room, after Batman has defeated Deathstroke and Dent has embraced becoming Two-Face, Anarky realizes Batman has defeated him in a game of chess representing the events of the series. Complimenting Batman on his victory, he asks aloud if the two should play again before setting up the board once more.

Anarky wears a completely white costume with a hood and cape, save for the symbol of anarchy on his chest. His utility belt is also white and contains various weapons such as flash-bangs and an extendable baton. It also has cylindrical attachments, much like Batman's belt in past incarnations. His eyes are completely white like Batman's but much larger.

In the first issue of the Beware The Batman comic series, Anarky disguised himself as Simon Stagg's home security product manager, going by the name "Robert Catesby". While in disguise, he had short blonde hair and brown eyes, wearing a grey suit and red shirt with a purple bowtie, as well as red sunglasses. Whether or not this is what Anarky really looks like, or if it was fake is unknown, although the latter is more plausible.

"Welcome, Gotham City, to the art... of destruction!" 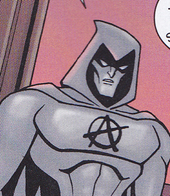 "Bravo! I believe this game just got interesting!" 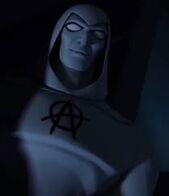 Anarky against the League of Assassins

"You are not very clever, Anarky!" 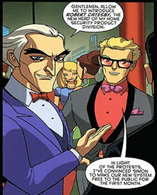