Barbara Gordon, aka Oracle, is a character appearing in Beware The Batman. She is voiced by Tara Strong.

According to the creators, "She is a very tech savvy teenager, and admires both Batman and his sidekick, Katana, for their bravery". She is also a great admirer of her father and often asks to help with his cases. Her hope is that if she helps to break a big case, her father may arrange a meeting for her with Batman. In the episode Allies, she was kidnapped as leverage for her dad, Jim Gordon to release Tobias Whale but was rescued by Batman and his new partner Katana, she also got her chance to meet Batman and peppered him with questions about his suit and equipment and was amazed by Katana claiming she could could be like her one day.

Barbara Gordon has dark red hair and black eyes, she wears a dark brownish grey sleeveless top with black pants, black flat pump shoes and a pair of glasses. Later on in the series she wore a grey jacket, with a black t-shirt, red tartan skirt with dark grey stockings and black boots. In the final episode: Alone, she is given a Mask similar to Katana's.

Barbara is a big Batman fan. She wants to fight crime like him. She can be sassy at times. She is also a computer genius and can hack into anything she sets her mind to, such as (on one occasion) the batcomputer. She became known as Oracle. She is loyal to her friends and heroes. She once risked her date and herself to help save Batman and Katana from Killer Croc. Because she is the daughter of James Gordon, she always looks up cases as a way to help Batman, mostly Katana. She is tired of her father's overprotectiveness and has few to no problems in arguing to prove her point.

Barbara is also caring. She respects and admires the mutants as shown with her awe of Man-Bat and Metamorpho.

Barbara was kidnapped by Phosphorus Rex.

Barbara is saved by Batman

Thank you Batman for what he did.

I'm going to be the worst father of the year for letting you do this!

Barbara on a date.

Barbara Gordon/Oracle, as a member of Outsiders 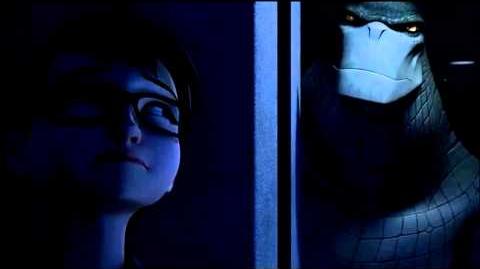