Batman, (real name Bruce Wayne), is a billionaire and vigilante who prowls the streets of Gotham City at night, along with his sidekick, Katana, fighting crime.

The Batman is; in his everyday identity, Bruce Wayne, a wealthy business owner living in Gotham City. Wayne averts suspicion by acting the part of a superficial, dull-witted playboy idly living off his family's fortune (amassed through investment in real estate before the city became a bustling metropolis) and the profits of Wayne Enterprises, his inherited conglomerate.

Wayne supports philanthropic causes through his nonprofit Wayne Foundation but is more widely known as a celebrity socialite.In public Wayne pretends to be a heavy drinker, using ginger ale to suggest champagne and liberally serving intoxicating beverages to guests that he never actually consumes himself. In reality, he is a strict teetotaler concerned to maintain top physical fitness and mental acuity. In public Wayne appears frequently in the company of fashionable women to encourage tabloid gossip. In reality there is less than meets the eye: though he leads an active romantic life, crime-fighting activities account for most of his night hours.

Bruce Wayne's calculated persona as a vapid, self-indulgent son of privilege finds literary precedent in Sir Percival Blakeney, hero of the the Scarlet Pimpernel stories by Baroness Emmuska Orczy (1903), and Don Diego de la Vega, hero of the Zorro tales by Johnston McCulley (1919). Like Wayne, Sir Percy and Don Diego are each members of gentry who invite contempt by publicly playing the fool. Also like Wayne, each performs heroic deeds in secret and marks his work with a signature symbol.

The name "Bruce Wayne" was chosen for certain connotations. According to co-creator Bill Finger, "Bruce Wayne's first name came from Robert Bruce, the Scottish patriot. Wayne, being a playboy, was a man of gentry. I searched for a name that would suggest colonialism. I tried Adams, Hancock...then I thought of Mad Anthony Wayne."

Writers of Batman and Superman stories have often compared and contrasted the two. Interpretations vary depending on the writer, the story, and the timing. Grant Morrison notes that both heroes "believe in the same kind of things" despite the day/night contrast their heroic roles display. He notes an equally stark contrast in their real identities. Bruce Wayne and Clark Kent belong to different social classes: "Bruce has a butler, Clark has a boss". T. James Musler's book Unleashing the Superhero in Us All explores the crucial role played by wealth in the Bruce Wayne story.

Modern stories tend to portray Bruce Wayne as the character's facade and the Batman as the truer representation of his personality (in counterpoint to the post-Crisis Superman, whose "Clark Kent" persona is the 'real' personality, and "Superman" is the "mask"). In Batman Unmasked, a television documentary about the psychology of the character, Associate Professor of Social Psychology at the University of California, Los Angeles, and an adjunct behavioral scientist at the Rand Corporation Benjamin Karney, notes that the Batman's personality is driven by Bruce Wayne's inherent humanity; that "Batman, for all its benefits and for all of the time Bruce Wayne devotes to it, is ultimately a tool for Bruce Wayne's efforts to make the world better".

Will Brooker notes in his book Batman Unmasked that "the confirmation of the Batman's identity lies with the young audience. He doesn't have to be Bruce Wayne; he just needs the suit and gadgets, the abilities, and most importantly the morality, the humanity. There's just a sense about him: "they trust him. and They're never wrong".

Batman, in most of his incarnations, is a dark and grim hero with a personal vendetta against criminals. Traumatized by the death of his parents, Batman has sworn to rid Gotham from the criminal elements that took his parents from him. He is very paranoid and obsessive, which often makes it difficult for him to trust other people that aren't Alfred, or Katana.

Despite this, Batman has proved to have a great love for humanity, which was instilled by his parents. His father was a doctor, while his mother was a crusader against child abuse. Indeed, Batman's oath of vengeance is tempered with the greater ideal of justice. He refrains from killing, as he feels this would not make him any better than the criminals he fights.

To protect his secret identity, Batman has constructed a fake persona he can use in his civilian identity. To the world at large, Bruce Wayne is a self-absorbed, superficial, irresponsible playboy and philanthropist. Only his closest allies know that this attitude is just an act.

Peak Human Conditioning: Due to years of training. Batman represents the peak of human conditioning. He is strong enough to bench press over double his body weight, fast enough to outrun the finest Olympic athlete, and even be able to be tougher than the biggest heavy-weight boxer. Batman also possess remarkable agility, reflexes, flexibility, stamina, healing and a high longevity.

Behind the scenes of Beware the Batman. 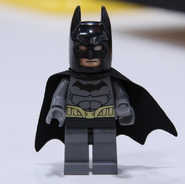 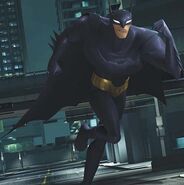 Batman was threat to Simon Stagg.

You're a hero, I'm avenger and that the roles, which we are playing!.

Bruce Wayne is captured by Bethanie Ravencroft and Silver Monkey.

Batman with Katana and Metamorpho