Cypher was an agent of the League of Assassins, sent to obtain plans for the Ion Cortex, only to run afoul of the Dark Knight. Though he managed to gain temporary control over Katana, and later Batman, the two heroes were able to defeat and capture him. Then he made small appearance in the episode Reckoning, where he and other super-villains from Blackgate prison were hired by Ra's al Ghul to kill Batman. For killing Batman, Cypher took over mind control of Magpie and Phosphorus Rex, but Batman used his batarang to attack Cypher, and pull the mind control tentacles off Magpie and Phosphorus Rex. Batman was about to put the handcuffs on him, but Mr. Toad used his super wave attack to throw Batman into a car. Batman understood that he would not be able to handle fighting all of his enemies at once. However, Batman tricked all the criminals by pretending to give up and they all turned on each other for the reward promised to them by Ra's. Batman then leaves them fighting.

Cypher wears a lightly armored suit of dark and bright, glowing, green. His main weapons are long, tentacle-like cables that extend from his palms. These cables allow him to "plug" into a person and hijack their minds. Once in control of a person, Cypher is able to manipulate them, forcing them to follow or even fight for him. On his own, Cypher doesn't seem to be that strong of a fighter, preferring to let his captives fight for him. He has a slender build and is extremely agile and flexible. His suit allows him to adhere to walls and ceilings. Cypher's control is both his greatest weapon and his greatest weakness. While in control of a person, he feels everything that they do. Blows and injuries sustained by them hurt him as well. He also feels other emotions from them, including love.

Cut those, and you'll fried her brain!

Afraid to hurt her?

I have no problems with it!

I told that I would kill them, Batman!

Good to see you again, Batman! 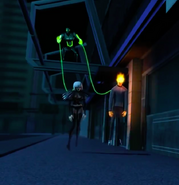 Still under control of Cypher. 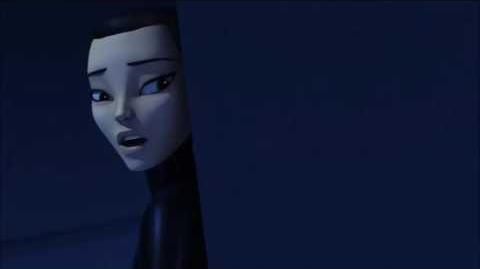