Start a Wiki
Instinct is the 11th episode of Season 1 of Beware the Batman. It premiered on October 5, 2013.

Professor Pyg and Mr. Toad are back…and they’ve set their sights on Gotham’s elite couture culture. Leaving clues that only Batman can decipher, they attack both a model and a clothing designer – encasing them in deadly traps. Although Batman and Katana are able to save the day, they miss Pyg and Toad’s master plan: to destroy the yacht where the after-party for Gotham’s Fashion Week is being staged. Every fashion icon in the world will be there… as well as Bruce Wayne!

The episode opens with Azzura, one of Gotham's top fashion models, leaving a club in the company of her two body guards. Speaking on her phone, she says that she won't do an upcoming fashion show unless she is allowed to wear clothing made from endangered Condor feathers. Behind her, her guards are incapacitated with tranqylizer darts. She turns to see Mr. Toad launch his tongue at her, snatch her phone from her hand, and swallow it. Professor Pyg approaches her and admonishes her for wearing the skins and feathers of helpless birds and vows to show her how it feels to be a bird that can't fly. The scene ends with her screaming in fear.

Meanwhile, Bruce and Tatsu are having dinner at a restaurant, which Bruce owns, while Alfred is out of town. Bruce begins a training exercise for Tatsu, having her scan the room and tell him what she sees. She doesn't take it seriously and says she sees "Everyone but us having a pleasant dinner." Bruce then reveals that in the span of a few seconds he has noticed a waiter stealing from the register, a cheating husband at the next table, and a pickpocket on the street outside lift a wallet from a woman's purse. Tatsu is amazed and asks him if he ever turns it off. Bruce replies that he can't.

As they leave, they notice several people looking up at a clocktower down the street. The model from earlier is hanging by ropes from one of the hands of the huge clock. A cleaver is tied to the other hand and when the hands meet the rope will be cut. Tatsu looks to her side only to find that Bruce has disappeared. The hands meet, the rope is cut, and the woman falls. However, Batman leaps from the next building, catches her, and crashes through a window. The woman is unconscious but unharmed. Batman notices a note on her that reads "One for the dame." It is then revealed that Pyg and Toad have been watching the entire thing while enjoying tea and biscuits.

Later, in the Bat Cave, Batman and Katana analyze the note. The words are from the nursery rhyme "Baa Baa Black Sheep". They surmise that two more people will be targeted: the "Master" and the "Little Boy Down the Lane". Katana has the computer list every street in Gotham with "lane" in its name and Batman narrows it down to three.

Downtown, a fashion designer is working with leather while listening to loud music on his headphones. He doesn't hear Pyg and Toad enter the room behind him. They attack him, telling him that they are there to punish him for his crimes against animal kind. They entrap the man in a net and he faints. Batman and Katana arrive on the scene to find the designer strapped to his own work table with saw blades coming closer and closer to him. Katana thows shuriken at the blades but this fails. Batman tells her it was a good effort and tosses grenades that expel "exploding goo" and stop the blades. Batman finds another note reading "The little boy who lives down the lane" and notices some smudges of resin on the edge. Removing the cat mask from the victim, Batman recognizes the logo as that of a well known plastics company. He goes to check out the plastics company while Katana analyzes the resin.

She takes the resin to Jason Burr who isn't acting like himself. He tries to kiss her but she coldly rebuffs him before leaving. While searching the plastics company, Batman is ambushed by Pyg and Toad and is eventually trapped under a large shelving unit. Before they can finish him off, however, the police arrive, prompting them to escape. Freeing himself, Batman notices a set of schematics nearby. Further analysis shows them to be to the Gotham Opera House. This is the venue for the Masters of Fashion runway show. Putting together that this is the "one for the master" from the rhyme, the two heroes meet there. Once there, they discover a truck loaded with explosives set to go off in less than a minute. Batman rushes to the driver's seat and has Katana blast a way out of the garage with a rocket from her Batcycle. Batman jumps the truck out and leaps clear before it explodes.

Back at the Manor, Tatsu celebrates with ice cream but Bruce is unsettled. His instincts tell him they missed something. Just then, Tatsu recieves a call from Jason who apoligizes for trying to kiss her and also that he analyzed the resin. It is a phosporous resin from the skin of a rare African Toad that has been altered to be highly explosive when exposed to heat. She gives this news to Bruce who quickly surmises that the three traps from the rhyme were simply a way to keep the heroes busy while Pyg and Toad concentrate on their main target, the Fashion Week after party on a charter yacht. They make their way to the dock and Batman goes to confront Pyg and Toad while Katana evacuates the guests. Batman makes his way below and finds the eco terrorists at work. They tell him that they have rigged the ship so that once 280 guests have entered the party, the resin will explode. Batman tells them that the guests are being evacuated as they speak so Pyg has Toad start the detonation early. Batman tries to stop it but Pyg manages to freeze him in place with a coating of the hardened resin. Suddenly, Katana appears and frees Batman while beating back Pyg and Toad. They fight their way to the controls and Batman is able to disable it just in time. However, Pyg and Toad toss bombs at them, which Katana is able to swat back at them with her sword. The villains are incapacitated and Batman activates the onboard sprinkler system to keep the resulting flames at bay long enough for the ship to be fully evacuated.

Back at the Manor, Tatsu follows her own intincts and calls Jason to see if he is all right. He assures her that everything is fine and invites her to dinner which she accepts. Hanging up the phone, it is revealed that he is with Lady Shiva and the League of Assassins and has promised her the Ion Cortex. 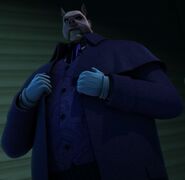 Add a photo to this gallery
Retrieved from "https://beware-thebatman.fandom.com/wiki/Instinct?oldid=12280"
Community content is available under CC-BY-SA unless otherwise noted.