James Gordon is the current lieutenant of the Gotham City Police Department, and one of Batman's greatest rivals. He spent most of the early episodes trying to arrest Batman but, in Darkness, finally teamed up with him and the two have been partners ever since. After the death of Commissioner Correa, Gordon became the new commissioner of the GCPD.

He is a controversial political figure in Gotham City because of his willingness to work alongside a vigilante, but he is one of the most honest cops on the force, often struggling against corruption from within. He frequently works outside the law when necessary, although he maintains a strict unbreakable moral code. He has made it clear, many times, that he only tolerates Batman because they follow the same code and if he ever crossed the line, Gordon would not hesitate to bring him down. His daughter is Barbara Gordon. 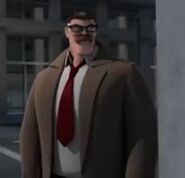 Jim Gordon is about to meet Lunkhead. 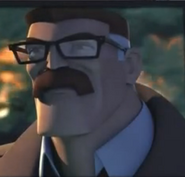 How did you get signal and how did you know my numbers?!

Batman! You're under arrest!

You're coming with me, Tobias!

Spit it out, Whales!

Thank you for saved my daughter, Batman.

Jim Gordon is commanding the operation

Jim Gordon is talking to his daughter

I'm going to be the worst father of the year for letting you do this!

Ready to protect the District Attorney.