Katana is a heroine appearing in Beware the Batman. She was hired by Alfred to be Bruce Wayne's new driver and bodyguard as well as Batman's new partner.

Tatsu Yamashiro, better known as Katana, is Batman's new sidekick and bodyguard in Beware the Batman. Tatsu's father worked with Alfred Pennyworth in MI6 for years until he was, tragically, killed in a car crash. Tatsu eventually joined the military and, later, the CIA. Eventually, after Alfred's urging, she agreed to become Bruce's new bodyguard. Bruce, not sure of Tatsu's intentions, decided to test her loyalty through a series of tests and training exercises. Tatsu has just recently been made aware of Bruce's double life and has agreed to join the family as his partner. She also seems to harbor a few secrets herself. It has been revealed that she was, at one time, a member of the League of Assassins while working undercover with the CIA, trying to locate Johnny Bravo. Instead, she found the Soultaker Sword. Katana, realizing that the weapon was too dangerous to kept in the hands of either the League or the CIA, stole it and left the League by faking her own death. She has kept the sword hidden ever since. However, during a botched attempt by Silver Monkey to take control of the League, the Sword was seized by the League's leader Lady Shiva. Katana has vowed to get it back and in the process has found out Batman's identity and become his sidekick Katana. In Allies she began working with Batman on rescuing Barbara Gordon and taking down low life thugs called The Ghosts in The Cauldron and then ultimately defeats Phosphorous Rex with a tanker truck.

In Control, Jason Burr invited her for dinner, but it was interrupted by villain Cypher, who stole Jason Burr by controling him. Batman and Katana are trying to follow him, but he managed to escape for sometime. Batman ordered Katana to look for Cypher and Burr, while he would lock the building. While searching, Katana saw Jason Burr was lying on the floor unconscinous. Katana tried to wake up, but when Jason opened his eyes, and it was still green. Katana doesn't understand, and in the moment, Cypher mind-controlled her too. But Cypher freed her, when Batman broke the control of metro.

Tatsu is a competent, intelligent individual who is focused on her goal. She is also a great detective able to find Bruce's secret bookcase. At times, though, Tatsu can be brash, impulsive, impatient, and disobedient. Early on, she considered Batman to be a "nut", and has been shown to have opinions differing from Batman's on the necessity of killing in certain situations. Batman has stated that Tatsu can have an ego, which she argued was simply pride in her work. Like Batman she can be cold and distant but can also have a sense of humor as shown with her interaction with Jason Burr and her godfather, Alfred. She also shows a softer more compassionate side, shown towards Jason and also shows a seemingly mentor and student or brother and sister like bond with with Bruce as shown when they are in the field.

Tatsu is a very tall attractive woman with a slim figure and her breast is big. She has brown eyes, and has long black hair that ends at her waist. She is usually seen wearing a black biker's jacket with sleeves, a pair of black jeans and boots. She is often seen without her jacket wearing a white tank top.

When she goes out for dinner at a nice restaurant, she wears a jade dress with heels. 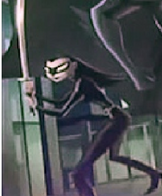 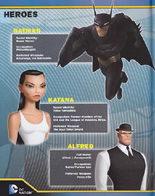 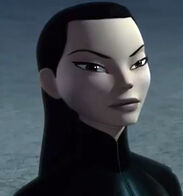 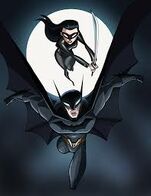 Batman and Katana on a mission!. 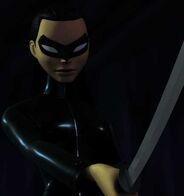 Tatsu's softer side around her godfather, Alfred.

Katana being controlled by Cypher.

Afraid to hurt her?

Trying to get the tentacle out.

Katana can't move in this suit.

Katana arrives to save Batman from Professor Pyg andMr. Toad