Magpie is a female super criminal in Beware The Batman. She debuted in the episode Secrets. Magpie suffers from a dissociative identity disorder and exhibits multiple personalities Superman and Batman foes

Magpie's true name is Margaret Sorrow. She was a chronic kleptomaniac and inmate at Blackgate Penitentiary. While serving time in prison, she took part in experiments in mind manipulation conducted by Joe Braxton and Bethanie Ravencroft. They used a helmet-like device on her to wipe away her original memories, removing the criminal aspects of her personality. She was given a new face and a new name; Cassie.

However, the removed aspects of Sorrow's original personality were not actually gone, and instead deeply buried in her subconscious, eventually resurfacing in the form of Magpie. Not knowing who her true self was, Magpie vowed to make Braxton and Ravencroft pay for what they did to her and get her stolen life back. As Cassie, Magpie got work as Dr. Ravencroft's receptionist, possibly driven there subconsciously by Magpie in order to get close to Ravencroft in order to enact her revenge.

In her first on-screen appearance, Magpie attacks Braxton and successfully wipes his memories out, catching the attention of Batman. Magpie attempts to goad Batman, declaring that they're very much alike due to the dark design of their costumes. Eventually, in her attempt to force Ravencroft to restore her memories, Batman reveals her past as Margaret Sorrow. Unable to recognize her other personality, Cassie, or reconcile with her criminal past, Magpie lashes out at Batman but is eventually subdued and arrested.

In Attraction, Magpie is revealed to have developed a romantic obsession with Batman, due to Batman secretly visiting her at Blackgate. Unknown to her, Batman empathized with how Magpie never received the psychiatric help she needed. Upon seeing Katana at Batman's side, Magpie believes that the two are romantically involved and resolves to kill Katana, so she can have Batman all to herself. Magpie is angered when Batman rebuffs her advances, and has Katana kidnapped to be buried alive in the graveyard. However, both Batman and Katana break out and defeat Magpie.

Magpie made a small appearance in Reckoning, where Ra's al Ghul frees her and other villains from Blackgate Penitentiary, where he promised them a portion of Gotham City to rule if they brought Batman to him. Magpie was the second one who tried to capture Batman, but she was stopped by Phosphorus Rex, who also tried to capture Batman. Magpie and Phosphorus Rex fell in battle, and became mind controlled by Cypher, but Batman quickly freed them. Magpie later engaged in a brawl to take Batman in, allowing the hero to slip away as the villains fought each other.

During the day she is a perfectly normal-looking young woman named Cassie with short cropped hair and grey eyes. She wears a black sleeveless shirt and a beige knee-length skirt when working as a receptionist. At night, as Magpie, she wears a short white wig, black makeup around her eyes and a tight black outfit made of latex. Her uniform consists of black feather ornaments on her shoulders, a tight black latex corset that reveals a good deal of her cleavage, tight black latex panties and black latex thigh high-heeled boots. Her fingernails can sprout into long razor sharp talons lined with the nerve poison curare, which she uses as her primary weapons. She is an extremely quick and agile fighter, easily keeping up with Batman. The experiments on her mind had the side effect of making her immune to pain, so she is much more durable than she appears and is able to ignore most injuries. She retains her original kleptomania and can't resist taking things that shine and sparkle much like her namesake. Her cleavage is shown which makes her breasts stick out

Margaret Sorrow suffered from kleptomania in the past and repeatedly committed crimes. After participating in an experiment involving memory manipulation, she develops a split personality. As Cassie, she is a very kind and loving person. As Magpie, she was obsessed with Batman because of the times he went to visit her at Blackgate Penintentiary. When she found out the truth about who she was and she refused to believe who she was and started to hate the name Margaret for that reason. 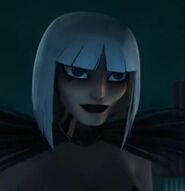 Sexy and deadly at the same time!

Magpie is using her super claws

Hey, you just hit a girl!

Victory over the Batman

You're such a good boy, Doc.

Even being a villain, she is still very sexy.

Magpie got captured by Cypher's tentacles

Going to kill Katana with jealousy of love for Batman 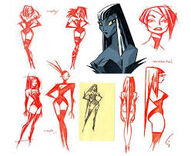 Nothing is going on between us!