Metamorpho, formerly known as Rex Mason, is a character appearing in Beware the Batman, first introduced as an antagonist in the episode Toxic and became a hero in the episode Monsters.

A security guard working for wealthy industrialist Simon Stagg, Rex Mason fell in love with Stagg's daughter Sapphire. They met in secret as Rex was sure that her wealthy, elitist father would never accept him as a worthy son-in-law. However, Stagg found out about their relationship and vowed to arrange a "accident" for Rex. Disguised as an intruder, he tricked Rex into an experimental chamber and flooded it with a mix of experimental chemicals. Though Stagg had intended for them to simply kill him, these chemicals radically changed Rex's cellular structure. He slowly mutated into a monstrous form composed of many types of elemental materials including rock, metal, and ice. Rex vowed vengeance and attacked Stagg but was tricked into the same chamber that created him by Batman who tried to cure Rex but failed. Sapphire sadly confessed that she couldn't continue to be with Rex as he was now and Rex, heartbroken, broke the ventilation system in the chamber and faded away to vapor only to be seen reconstituting himself in the sewers sometime later. In the episode Monsters, Rex resurfaced and took up residence in an abandoned church in Old Gotham and fought crime as a vigilante people dubbed "The Golem of Old Gotham". He aided Batman and Katana in defeating the armored thugs sent by Sapphire Stagg and took on the codename "Metamorpho".

No longer in control.

Metamorpho made his hands more dangerous.

Rex Mason under influence of electricity. 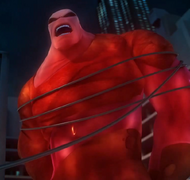 Metamorpho has heated up.

Confronting the enemies together.

Metamorpho, as a member of Outsiders

Metamorpho stands at roughly seven feet tall and his body seems to be a rough patchwork of different materials ranging from stone, ice, metal, concrete, and plastic. Metamorpho can shape his body, usually his hands, into different weapons and tools including blades, clubs, maces, and shields. He can also change the consistency of his body from liquid to gaseous. Metamorpho also exhibits the ability to control his body heat, able to make himself either hot enough to melt metal or freezing cold. He also absorbed the power of electricity from Batman's stun batons and gained the ability to project lightning bolts.