Mr. Toad is a mutated villain appearing in Beware the Batman and is the partner of Professor Pyg.

Mr. Toad debuted in the the premiere episode "Hunted". In the episode Mr. Toad was shown to be working with Professor Pyg in order to kidnap three leading Gotham industrialists who all had a hand in a shady land deal that Mr. Toad, as an eco-terrorist, strongly opposed. In episode "Instinct " Pyg and Toad targeted several fashion designers who used animals to create their suits. In "Reckoning" he helped Pyg to take down Batman to claim a bounty from Ra's al Ghul. In "Doppleganger" he and Pyg transform Dr. Langstorm into Man-Bat and use him to lead them to the chemical factories so that they may steal the chemicals needed to create the serum that will turn people into humanoid animals to take over Gotham City.

Unlike Professor Pyg, who appears to be a normal man in a mask, Mr. Toad appears to be an actual anthropomorphic African Toad. He is able to leap about with the ease of his namesake and also posseses the ability to launch highly concussive blasts of sonic energy from his mouth when he croaks. One of these blasts was able to send Batman flying across a room. Toad speaks with a slight German accent and carries a wooden cane with a blow-torch hidden inside it.

Pyg and Toad in building of Keystone Wetland 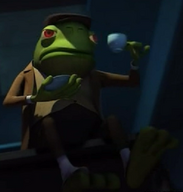 Mr. Toad and Professor Pyg have the tea time 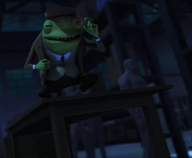 Mr. Toad is using the monocle

I think we defeated Batman, my dear Mr. Toad

Professor Pyg and Mr. Toad have a great plan

Mr. Toad is using his stick in action

Mr. Toad is ready to make his attack

Blasting at the door.

Will you marry me?

Thank you, for opening our cells...

Mr. Toad and Professor Pyg are about to crash!!!!

Mr. Toad, would you be so kind in doing this?

Besides, still one more stop before the night is through.