Phosphorus Rex is a villain appearing in Beware the Batman. He first debuted in the episode Allies. He is a villain with powers of fire manipulation.

Milo Match is an attorney in the employ of Tobias Whale. He also happens to be Whale's chief enforcer. For this less respectable job, Match uses a different persona along with his superhuman abilities. He possesses the power to create and manipulate powerful jets of flames. When using his powers his face and hands are engulfed in orange fire. As powerful as he is, his powers seem to be somewhat unstable as one of his fire blasts managed to injure and incapacitate his own employer, Tobias. His powers also seem to have limits as when he was forced to burn an batman foes entire tanker truck in the episode Allies, he became exhausted and his flames extinguished. He later appeared in episode Reckoning, where he and other supervillains from Blackgate prison, were hired by Ra's al Ghul to kill Batman.

As a lawyer, Match dresses in tailor-made suits. He speaks with an Eastern European accent, has orange hair and has a slender build. When using his powers, all of his exposed skin glows with orange flames. 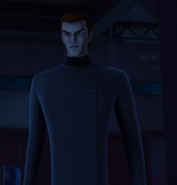 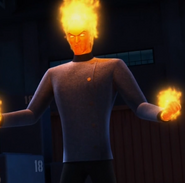 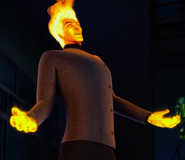 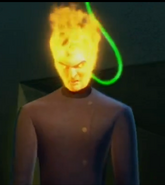 Phosphorus Rex under control of Cypher

Add a photo to this gallery

Retrieved from "https://beware-thebatman.fandom.com/wiki/Phosphorus_Rex?oldid=12951"
Community content is available under CC-BY-SA unless otherwise noted.