Professor Pyg is a recurring antagonist in Beware The Batman.

Professor Pyg debuted in the series premiere episode "Hunted". In the episode, Pyg was shown to be working alongside Mr. Toad as self-styled "eco-terrorists" to capture three leading Gotham industrialists, all of which were part of a shady land deal that threatened the habitats of the indigenous flora and fauna of the wetlands. In the episode "Instinct" Pyg and Toad targeted several fasion designers who used animals to create their suits. In "Reckoning" Pyg and Toad was offered by Ra's al Ghul to get rid of Batman to get price from him. In "Doppleganger" Pyg and Toad turns Dr. Langstorm into Man-Bat and use him to lead them to the chemicals factories to steal the chemicals the Langstorm use in his serum. They both want to create an army of humanoid animals to take over Gotham City.

Professor Pyg speaks with a thick British accent and quasi-elegant air instead of an English accent and pig noises. His frame is very tall and obese yet he possesses prodigious strength. He and Toad seem to prefer vehicles and equipment of a distinctly vintage feel. Their vehicle of choice is a modified antique Model-T fitted with a fuse-fired cannon. He carries a blunderbuss loaded with tranquilizer darts as well as a large bonesaw which he wields as a melee weapon. Pyg dresses in a large purple greatcoat and a pig mask.

Pyg and Toad in building of Keystone Wetland 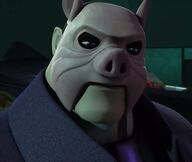 Beside, still one more stop... before the night is through! 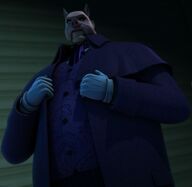 My associate, Mr. Toad, has the exotic appetizer.

Professor Pyg and Mr. Toad have the tea time

Professor Pyg and Mr. Toad have a great plan

About to throw knives at Batman.

Professor Pyg is interrupted by Katana

Actually, that was a rhetorical question!

But your problem is just that, yours.

Professor Pyg and Mr. Toad are about to crash

Keep your tentacles away from him, old chap!

Mr. Toad, would you be so kind in doing this? 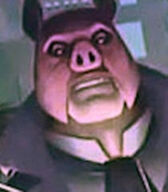 Profiles of Professor Pyg and Toad

Besides, still one more stop before the night is through.