Safe is the fourth episode of Season 1 of Beware the Batman. It premiered on August 3, 2013

Katana's history is revealed along with the fact that she is hiding the Soultaker Sword.

We join Bruce Wayne at a press conference where he introduces Dr. Jason Burr, a brilliant physicist working for Wayne Industries. Burr has created the Ion Cortex, an artificial intelligence energy regulation system, that is expected to not only solve the world's energy problems but, in fact, create a world energy surplus within five years. As Burr begins his speech, he is interrupted by an attack by several ninja! The guards are soundly defeated by the ninja, who attempt to abduct Burr. Bruce and Tatsu rush Burr out of the building but he trips and the ninja are almost upon him. Bruce runs to the safety of his limo (to suit up), instructing Tatsu to help Burr. Tatsu engages half a dozen ninja and defeats them all, yet one manages to capture Burr, holding a katana to his throat. Tatsu leaps and disarms the ninja with a jump kick, catches the blade and is about to use it on the hapless ninja only to be stopped at the last second by Batman. He tells her that murder is a line, once crossed, you can not go back. Batman and Tatsu mop up the rest of the ninja but one is able to ignite a smoke bomb and escape. Batman lectures Tatsu again about the choice between saving lives or taking them but she merely voices her disdain of being given an ethics lesson by a "nut dressed like a bat". Once Batman leaves via the Batclaw, Tatsu asks Dr. Burr if he is all right. He responds by grabbing her in a hug, thanking her for saving his life. She pushes away and shoves him into the limo with Bruce. Burr doesn't understand why the ninja would target him, prompting Bruce to surmise that someone else must desparately want the Ion Cortex. He invites Dr. Burr to stay with him at Wayne Manor for his protection. He agrees as long as Tatsu is there.

At the headquarters of the League of Assassins, the sole remaining ninja is being admonished for his failure. He is knocked unconscious by a warrior wearing a monkey mask before being dragged away. This warrior, Silver Monkey, is tasked by the mysterious Lady Shiva to retrieve Dr. Burr.

At the Manor, Alfred takes Dr. Burr on a tour and gives a rundown of the extensive security measures including the Panic Room. He also inroduces Mr. Reese, the head of a security team hired by Bruce for Burr's protection. Dr. Burr insists that all he needs to feel safe is Tatsu, causing her to roll her eyes. Bruce arrives, telling them that he is leaving for a date, much to Tatsu's annoyance. This, however, is a cover for Batman to go to Burr's lab and hunt for clues to who may be after him. He races off on the Batcycle. Once at the lab, he almost immediately attacked by several League ninja. He fends them off, demanding to know who sent them. They flee on motorcycles with the Bat in hot pursuit.

Burr clumsily tries to strike up conversation with Tatsu. She is cold at first but begins to warm to him...slightly. He tries to get her to relax as the manor is completely safe. She replies vaguely that one is never completely safe.

Back on the streets of Gotham, Batman catches up to the ninja. He leaps his bike ahead of them and releases tire-shredding caltrops that disable most of their bikes. He yanks the remaining ninja off of his bike and demands information. The ninja only says that Batman is too late to stop "him". Batman races back to the manor, commanding the Bat Computer to call the manor. Tatsu misses the call as she is busy checking Burr's room before he beds down for the night. Alfred instructs Reese to have his men lock down the house. Reese meets up with two guards at the main gate. They report that everything is clear and he turns to go. When they turn back to the gate they are both hit with knock-out darts. It is revealed that Reese himself knocked them out to clear the way for two elite League ninja. Reese reveals that his face was just another mask and he was truely Silver Monkey the entire time.

Batman, still trying to alert the Manor to the danger, contacts Alfred through the Bat Cave com-link while being attacked by a new squad of ninja. He instructs Alfred to activate the Fail-safe Protocol and get Burr to the panic room. The fail-safe activates an impenetrable laser defense grid and defensive missile turrets. Batman assures Alfred that he will find some way of getting inside. Tatsu gets Burr out of bed and hides him in the next room. Just as she does, Silver Monkey arrives and shoots a dart at Burr's empty bed. Before he realizes what's happened, Tatsu locks him in the bedroom and flees with Burr to the panic room as Silver Monkey begins punching his way through the door.

Back with Batman, he has the computer analyze a way to get through the grid into the Manor. The computer devises a way with a 28% chance of success. Batman takes those odds and transforms the bike into the Bat Glider. He approaches the Manor and avoides the missile barrages and crashes the glider through the roof. He rushes to the rescue, muttering that ne needs a new securtiy system.

Tatsu and Burr head to the panic room but are confronted by Silver Monkey. Monkey recognizes Tatsu and is surprised, as he thought her to be dead. As the two fight, he mentions some sort of betrayal on her part and calls her a traitor. Eventually Alfred arrives and chases Monkey off with several gunshots. Silver Monkey meets up with one of his ninja and both are ambushed by Batman. During the fight Batman is near blinded by a smoke bomb but rallies and is able to defeat both ninja while Silver Monkey escapes. Alfred and Tatsu get Burr into the panic room. As Burr and Alfred enter, Tatsu seals them in and rushes to her room and retrieves the glowing sword from her closet.

In the panic room, Alfred overrides the fail-safe so that help can arrive. On one of the cameras, they see Silver Monkey attaching a bomb to the panic room door. Before he can activate it, however, he is confronted by Tatsu with the sword. She takes the detonator and forces him to deactivate the bomb. Silver Monkey refers to her as "Katana" and says that she will regret sparing his life. As they walk toward the door, he activates a hidden blade in his boot and uses a leg sweep to disarm Tatsu. He looks at the sword with reverence, calling it the "Soultaker Sword". Just as the League believed Tatsu dead, they also believed the sword to be destroyed. Just as he is about to use it to kill Tatsu, Silver Monkey is stopped and disarmed by Batman. He remarks to Silver Monkey that the bomb wouldn't even work on the blast door of the panic room. Silver Monkey kicks the bomb to the adjacent wall; it explodes and he escapes through the resulting hole with Batman right behind him. Tatsu retrieves the Soultaker Sword and hides it in a large vase before following. Silver Monkey races out of the house, barging through Batman and knocking the Batclaw out of his hand. He leaps off of the cliff towards the sea and Batman grabs his ankle at the same moment Tatsu catches Batman's ankle with the Batclaw. Silver Monkey kicks out of Batman's grip and falls toward the water. He throws a smoke bomb at Batman's eyes and seems to vanish altogether.

Batman climbs back up to Tatsu. She finally collapses and remarks that she should have killed Silver Monkey when she had the chance. Batman disagrees, saying that she did exactly what she should have. She mentions that she may be starting to change her mind about him. Just then, Alfred and Dr. Burr arrive. Dr. Burr is hysterical over Tatsu's (non-life threatening) injuries begging her to "stay with him" and promising that he will "save her life" as she saved his. Batman and Alfred just look at each other, speechless.

At the headquarters of the League of Assassins, it is revealed that Silver Monkey survived and returned. He informs Lady Shiva that Tatsu is alive, having apparently faked her own death. However, Silver Monkey keeps the existence of the Soultaker Sword to himself for reasons of his own. Lady Shiva considers the news of "Katana" to be prize enough and mentions that they will leave Dr. Burr alone and find another way to gain the Ion Cortex. 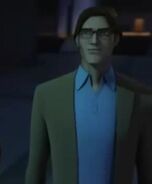