Simon Stagg is a supporting character turned villain in Beware the Batman who made his debut in the episode Hunted.

Simon Stagg is one of the richest industrialists in Gotham. He drew the attention of Pyg and Toad when he participated in a shady land deal that destroyed the protected wetlands, but was ultimately saved due to Batman's intervention. BATMAN FOES

Simon took a bigger role in transforming Rex Mason into the shape-shifting monster Metamorpho. Upon learning that Mason became romantically involved with his daughter, Sapphire, Simon plotted to have Mason removed. Feigning as an intruder, Simon lured Mason into a gas tank and exposed Mason to gasses from an experiment codenamed "Project Metamorpho". Although Mason survived, his appearance drastically changed, giving Simon the pretext he needed to disapprove of Mason's relationship with Sapphire. Simon later deleted the security footage of his sabotage, but this was discovered by Batman. Batman informed Mason of the incident, and forced Simon to cooperate in luring Mason into position so Batman could attempt to cure Mason. Upon the cure's failure, Simon attempted to pin the blame on Batman, but Batman revealed that he secured the deleted footage, exposing his treachery to a devastated Sapphire and the polices.

Simon later made an appearance in prison, having been arrested for his attempt on Mason's life. Batman interrogated him over vandals attacking Old Gotham using armored exoskeletons designed by Stagg Industries. Although Stagg approved of the vandalism, he claimed innocence due to the fact that he was in prison the whole time.

Simon is a selfish, self-centered person, used to privilege and giving out orders. He was ready to leave Alfred behind and escape even though Alfred had just saved his life. Simon is also arrogant, self-absorbed, greedy, and an elitist.

Simon Stagg and his guards.

Simon Stagg with a weapon.

Pretending to be innocent by put the blame on Batman. 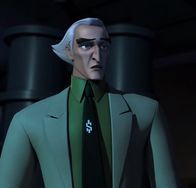 Stagg worried that he is under arrest.

Deleted video of Simon Stagg, which he wanted to keep away from Gotham police.

Batman was threat to Simon Stagg.

Simon Stagg is captured by Professor Pyg and Mr. Toad.
Community content is available under CC-BY-SA unless otherwise noted.
Advertisement